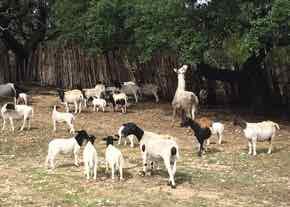 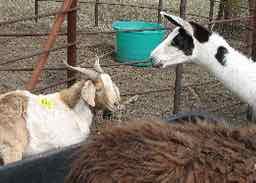 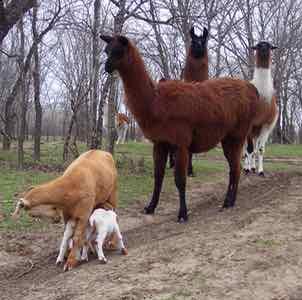 Llama & Sheep-Day 2 of the Bonding Process 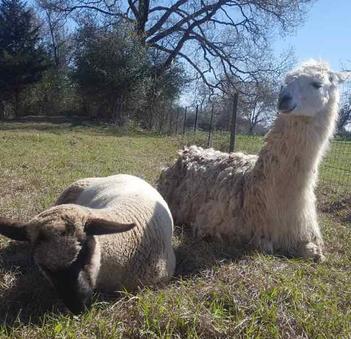 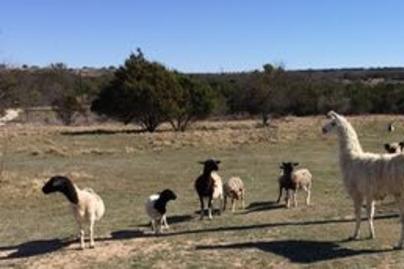 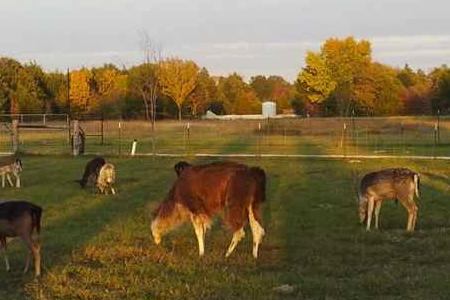 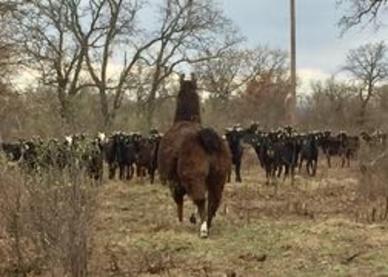 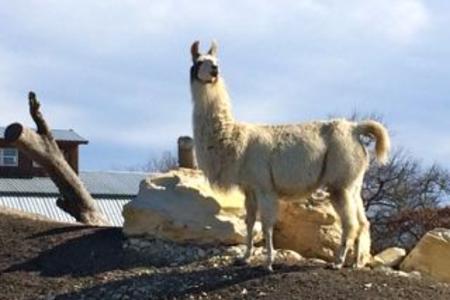 Llamas, who are long-lived, can provide an effective, long-term and economical alternative for predator control in a variety of farm and ranch conditions. Sheep and goat producers currently using llamas to guard their flocks are experiencing high levels of protection from predators.

While bears, cougars, bobcats, foxes and eagles are predators of sheep and goats and may be responsible for substantial loss, a 1990 report showed that coyotes caused 64% and dogs 14% of losses. Previous studies conducted in the western United States indicated that 76-100% of predator losses were due to coyotes. Coyotes also account for over 50% of predator losses to goats in the top five producing states.

In the West, where most predator losses occur, an average 1-2.5% of the ewes and 1-9% of the lambs are killed annually. Twenty to 25% of producers sustained losses that exceeded 10% of their lambs, with some producers experiencing losses of 16% and higher.

Using llamas as sheep guards in North America began in the early 1980s and some sheep producers have used llamas successfully for that entire time. The use of guard llamas has greatly increased since a magazine article in 1990, when national attention was drawn to the potential use of llamas for guarding sheep.

Llamas have proven to be very effective against canines, especially dogs and coyotes. Over half of the llamas guarding sheep are 100% effective, completely eliminating losses. Many of these producers previously suffered losses of over a hundred lambs per year. Some have not suffered a loss to predators in two to ten years after purchasing guard llamas. An additional 40-45% of the guard llamas were highly effective in dramatically reducing predator losses. Only 5-10% of the guards were ineffective.

Training - No training or previous association with sheep or goats is required for a llama to be an effective guard animal.
Age - Llamas of a variety of ages at the time of initial introduction have proven to be effective guards. Using llamas younger than one year is not recommended.

Sex - Although intact male llamas are effective guards, gelded llamas are recommended. Intact males may attempt to breed the ewes, and could cause deaths or injuries. Gelding a mature intact llama should be completed several months before introducing him to the flock to assure he has lost interest in breeding. Too few individual female llamas are guarding sheep to warrant conclusions on their effectiveness. Females are very aggressive toward strange canines and placing several female llamas with sheep in smaller pastures has prevented predation of sheep.

Ratio - A single llama per flock is more effective than two or more llamas. Several male llamas tend to bond with one another rather than with the sheep or goats and may ignore the flock.

Method of introduction - At first sheep or goats may be afraid of the llama, and the llama may be cautious of the sheep or goats. Ideally, a llama should be introduced to the sheep while they are in a corral or small pasture rather than on open range or large pasture. The llama should remain in a small area until the sheep and llama seem well-adjusted and attached to each other. This encourages bonding between the sheep and llama. A llama introduced in this manner will be more effective as a guard against predators.

Some llamas appear to bond more quickly to sheep or goats if they are introduced just prior to lambing. Research to date has shown that the presence of lambs or kids at the time of introduction did not influence the eventual effectiveness of the guard llamas. Many sheep and goat producers indicate a special bond quickly develops between lambs and their guard llama and that the llama is particularly protective of the lambs.

Some newly-introduced llamas are comfortable around people and may actually seek out human companionship. Livestock producers should avoid contact with this type of llama and not allow the new llama to become attached to people. The llama needs to bond with the sheep or goats.

Many llamas have successfully guarded 200 to 1,000 sheep in a variety of pasture situations. The optimum number that one llama can guard has not been established and may depend on several factors, such as terrain, vegetation, size of pasture and density of predators. Although llamas have been effective in guarding sheep grazing in forests and on open ranges, insufficient data exists to make firm conclusions relative to their effectiveness in this environment.

Llamas eat the same food as sheep and goats. The producer does not need to provide special care or individually feed the llamas each day as they do dogs. Llamas have a well-deserved reputation for having good health and few medical problems. Their calm disposition helps them avoid injury in the field.

If sheep and goat producers provide an effective health protection program for their flocks, they can usually use the same regimen of vaccinations, worming and hoof trimming (toe nails for llamas), etc. for the llama. This usually includes C&D clostridia diseases and tetanus vaccinations at the same dose per pound as sheep. Worming can be accomplished by injectable or pour-on bovine ivermectin or common oral worming pastes. In humid areas with large populations of white-tail deer, meningeal worms may be a problem to llamas. Guard lama owners are encouraged to purchase a book on llama health care or obtain informational pamphlets from the International Llama Association.

Llamas may suffer tick paralysis and, if ticks are, common in their area, owners should be alert to the llama's condition during tick season. Llamas may be afforded protection during the brief tick season by administering Ivermectin.

Llamas often live to be over 20 years of age. Although data on longevity of llamas used for guards is limited, llamas in their late teens are continuing to be effective guards.

Llamas have a very low rate of mortality as guards. The Iowa State University study reported the mortality of only 5% of the 204 guard llamas in their study. In contrast a national survey by the U.S. Sheep Experiment Station at Dubois, Idaho, has shown that 50% of guard dogs on ranches died within 18 months of introduction and 50% of those on farms died within 38 months. The U.S. Sheep Experiment Station, which developed and promoted methods for the use of guard dogs, recently purchased llamas to guard their experimental flocks.

Most llamas have an innate dislike for canines. When a llama is placed with a flock, he often becomes much more protective as he begins to bond with the flock and to establish and protect a territory.

Most guard llamas stay continually with the flock and prevent it from dispersing widely. They often seek an elevated area from which to watch the flock when it is spread out grazing. A minority of the guards will stay separated, though near the flocks. Many llamas take complete control of the flock keeping them together and moving them to feed, water or shelter.

Llamas are extremely alert and notice most things that happen in or near the pasture. Llamas use a variety or combination of methods to protect the sheep or goats. They may immediately run or walk after a coyote or dog with the intention to either stomp or hit the predator with their legs and chest. They may place themselves between the coyote or dog and the sheep or goats. They may also herd the sheep into a safe area or comer or they may prevent the flock from entering an area where a predator is located. Some llamas will sound their alarm call, a high pitched, pulsating vocalization, during these activities or as soon as they see a predator. Some llamas have been reported to display extraordinary protective behavior such as herding the sheep to safety during snow, seeking help when needed, and lying down by newborn babies to protect them from wind and weather.

Although llamas may initially be aggressive toward the family dog or herding dogs that the producer uses to move the flock, they usually learn to tolerate their presence. It is not unusual for the guard llama to chase herding dogs if they cause the lambs to continually cry out.

It is recommended that guard llamas and guard dogs not be used in the same flock.

Llamas have been successfully used to protect animals such as cattle and exotic deer. Some producers have effectively used llamas to protect their emus or ostriches by constructing a fenced run around the perimeter of their bird pens for the llama. Data regarding these other types of animals has not yet been collected.

While further studies need to be conducted to determine the physical, behavioral and breeding characteristics that make the best guards, llamas of many different sizes make effective guardians. A llama significantly larger than the sheep or goats would have some advantages in seeing and frightening predators away from the flock.

Llamas with long body and/or leg wool may need special attention. More frequent shearing may be required as their wool collects burrs, twigs and debris.

Llamas train very easily. Training greatly facilitates their loading, moving and ease of administration of medications, as well as the working and loading of sheep or goats. Llamas that halter, lead and load easily and also permit handling of their body and legs will be easier to manage.

Llamas that have bonded to humans due to bottle feeding or excessive handling may not make good guards, especially in the proximity of humans.

Guard llamas often drastically reduce, or in some cases, completely eliminate predator losses. The value of livestock saved each year often exceeds the initial cost of the llama and the small annual maintenance. Even for the small producer, a llama is economical when cost is amortized over the llama's effective guard life. Llamas live a long time, have low maintenance, require no training, and protect the flock from other environmental hazards. In addition to increasing profits, they also decrease costs associated with traditional predator control methods used by federal agencies. Guard llamas provide an acceptable environmental method to prevent predation.

Summary of advantages of llamas for predator control


© 1995 International Llama Association. This publication may be reprinted if done so in complete form and credit is given.